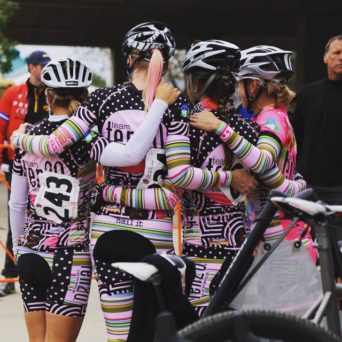 Founded in fashion and enamored with all things cycling, our team has become a positive force in women’s cycling. The Petunia Mafia story starts with our founder’s innovative vision of what a women’s bike team should be.

Patty Nilsen became an amateur mountain bike racer and cycling enthusiast early in adulthood. She helped create and designed Cannondale cycling apparel for nearly 10 years, followed by a career designing active apparel for top global athletic brands. While she had the credentials to join one of Boulder’s many cycling teams, she didn’t have the time commitment to participate in mandatory races or show up at every team ride. Patty found barriers in committing to another obligatory anything with all that being a busy modern woman entails – let alone turning a passion into a “have-to.”

Yet, Patty had a longing to belong. When she showed up at her first cyclocross race in 2009 she realized she was the only one without a team affiliation. Drawing from her athletic apparel design background, she decided to create her own club.

Patty’s design aesthetic encompasses all that is full of fashion risk: contrasting colors and bold layering of patterns, wrapped up in a sexy-feminine-sporty package. She wanted to create and be seen in a sassy yet performance-based cycling kit. Concurrently, she noticed a local business – ten20 Nail and Waxing Spa – had a bold and beautiful striped logo. That graphic had the design basis of what she envisioned.

Ten20 Spa agreed to support the club as presenting sponsor and became the eponymous name: Team ten20 Cycling. Patty’s idea went viral and grew from her original 5 friends to 25 the following year to a current roster of over 400.

In 2017 the ten20 spa owner decided to exit the business. Consequently, Patty and then-president Laura Wisner mulled the idea of renaming the group to offer a broader geographical connection with longevity instead of hinging the title on a sponsor. They decided to rename the club according to their coincidentally common childhood nickname: Petunia. As the team’s spirit has always peppered sass into its sweet nature, they added “Mafia” to give it an edge that also reflects a sense of community and family. Hence, Petunia Mafia Cycling.

Women and men constantly positively comment on each season’s kit. While women may be hooked by the look, they’re drawn in and retained by the team’s sense of community on and off the bike. Petunia Mafia prides itself on a welcoming and encouraging attitude toward racers and non-competitors alike.

Based in Boulder, Colorado with members in multiple states, we welcome a wide variety of speeds on road, gravel, mountain, and cyclocross bikes. The team’s mantra is to empower, encourage, and educate women on the bike, all while sporting stylish covet-worthy kits. Patty currently serves as President and Team Designer alongside a full roster of team leaders.

History of Petunias in Aspen: